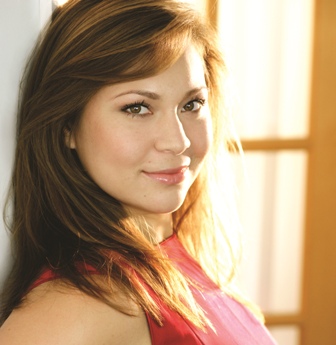 American Mezzo-soprano Irene Roberts continues to enjoy international acclaim as a singer of exceptional versatility and vocal suppleness. A resident artist with the Deutsche Oper Berlin, Roberts’ many roles this season include the title in Carmen, Marguerite in La Damnation de Faust, Nicklausse in Les Contes d’Hoffmann, Fenena in Nabucco, and Dulcinée in Don Quichotte.  She recently made her debut at the Dutch National Opera as Nicklausse, and last summer made her debut at Teatro La Fenice in the role of Amneris in Aida and at the Macerata Opera Festival as the title role in Carmen.

Roberts has a close relationship with the San Francisco Opera where she made her debut in Les Contes d’Hoffmann in 2013. She has since returned as the title role in Calixto Bieto’s US debut production of Carmen, and in the world premiere of Bright Sheng’s Dream of the Red Chamber. Recent engagements have included Le nozze di Figaro and Parsifal at the Metropolitan Opera, Don Giovanni, Madama Butterfly, Les Contes d’Hoffmann, and Ariadne auf Naxos at Palm Beach Opera, L’Italiana in Algeri with Lyric Opera of Kansas City, Marschner’s Der Vampyr at New Orleans Opera, Il barbiere di Siviglia with Atlanta Opera, and Gounod’s Faust with Lyric Opera Baltimore.

On the concert stage, Roberts embarked on a five-city tour of France in May of 2017 with the Orchestre national d’Île-de-France as soloist for Rossini’s Stabat Mater under the baton of Enrique Mazzola. Roberts made her debut at London’s Wigmore Hall in 2016 in recital with tenor Bryan Hymel and pianist Julius Drake. Previous concert engagements include performances with Gustavo Dudamel and the Los Angeles Philharmonic at the Hollywood Bowl, Miami’s New World Symphony led by Joshua Gersen, and at the US Naval Academy for its annual holiday presentation of Handel’s Messiah.

Roberts studied at the University of the Pacific and the Cleveland Institute of Music, and is a graduate of the young artist program at Palm Beach Opera. She won 2nd prize in the Advanced Division at the 41st Annual Palm Beach Opera Vocal Competition and was a finalist for the 2014 Richard Tucker Career Grant.