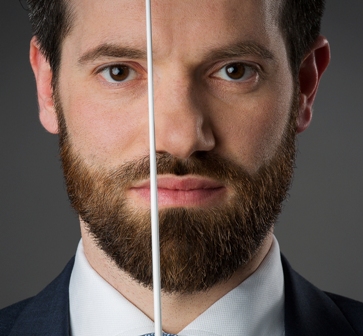 Meantime he began his studies in Composition, perfected himself in conducting in Mannheim and in Karlsruhe.

He made his debut on the podium with Falstaff at the Teatro Mancinelli in Orvieto, then began a stable collaboration with Oper Frankfurt as vocal coach and Kapellmeister. He is assistant to Sebastian Weigle, Bertrand de Billy, Antonello Manacorda, Carlo Franci, Antonino Fogliani, Jader Bignamini and collaborates with lyric artists such as Christian Gerhaher, Michael Spyres, Željko Lučić, Quinn Kelsey, Carlo Ventre, John Osborn.

For the Oper Frankfurt he conducted Monteverdi L’incoronazione di Poppea, with Gaëlle Arquez in the role of Nerone. This was followed by the new production of Radamisto by Händel, and  a revival of Ezio by Gluck, with Max Emanuel Cenčić in the title-role.

In 2016 Simone Di Felice made his debut in Rossini’s repertoire with La gazza ladra and next he conducted a revival of Rigoletto.

Great success by public and critics gets the Händelian production of Rinaldo, with the countertenor Jakub Józef Orliński protagonist and directed by Ted Huffman.

In 2018 Simone Di Felice debuts on the podium of the Basel Theater with La Cenerentola.

In the autumn of the same year he conducted in Frankfurt the revival of Die Zauberflöte. The recent reprise of Rinaldo confirmed the enormous success of the 2017 premiere.

During the season 2019-20 he conducted a new production of Satyricon of Bruno Maderna and La Gazzetta in Frankfurt and a revival of Händel’s Radamisto.

Among future engagements Serse and Orlando in Frankfurt, concerts in Minorca and Paris.