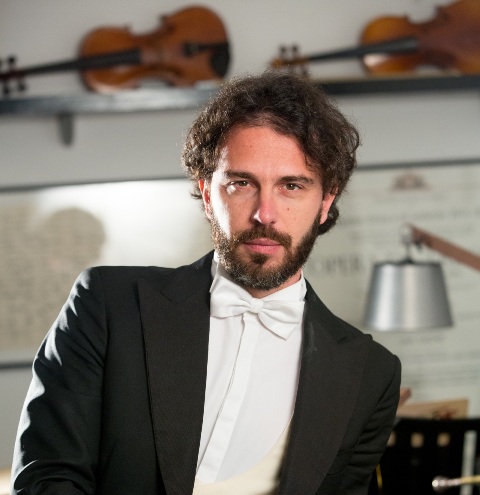 In recent years he has regularly performed in some of the most prestigious Italian opera houses.

He has been music director of Orchestra Filarmonica Toscanini for 4 years where he continues a regular partnership for many projects.

He has also strongly devoted to twentieth century music and contemporary music and opera.  He conducted  Il medico dei pazzi by Battistelli at Opéra de Nancy and at La Fenice di Venezia, where he also conducted La voix humaine and Janàček Zápisník zmizelého.

He inaugurated the Macerata Opera Festival 2015 conducting Rigolettoand in the 2017 he has been appointed Music Director of the Festival.
During the 2016-17 season he made his debuts with Tokyo Philharmonic Orchestra, National Opera Theatre of Montpellier, Essen Opera Theatre and at the Rossini Opera Festival of Pesaro  with Torvaldo e Dorliska, where he is unanimously acclaimed by the critics.

Among recent engagements: Nabucco at the Deutsche Oper Berlin, La Bohème at La Fenice of Venice, Lucia di Lammermoor at the Opéra de Toulon, Rigoletto at the Dresden Semperoper, L’elisir d’amore at the Macerata Opera Festival: among future engagements, Macbeth at the Zurich Opernhaus, La Traviata at the Oper Frankfurt, Carmina Burana in St. Petersburg with the Accademia Nazionale di Santa Cecilia, West Side Story and Risurrezione at the Maggio Musicale Fiorentino, La Favorite at the Teatro Massimo of Palermo, 7 minuti (new Battistelli’s opera) in Nancy, La Traviata at La Fenice of Venice, Le nozze di Figaro at the Bolshoi in Moscow and in Beijing, a new productions of Carmen at the Sferisterio Opera Festivalin Mancerata and of Il viaggio a Reims at in Dresden; among future engaments: Risurrezione in Florence, Il viaggio a Reims in Valencia, Un ballo in maschera in Budapest, Rigoletto in Hamburg, Tosca in Macerata, Aida in Brisbane and L’elisir d’amore in Munich.