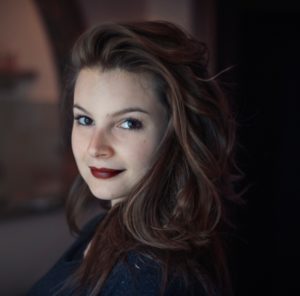 Soprano, born in Genoa in 1994, began to study singing at the age of 13, then later coached repertoire and refined technique with Barbara Frittoli,   her  current singing teacher.

She won the Youth Prize at the Fifth International Francesco Paolo Tosti Competition for Singers, and then she performed three concerts in Tokyo  and Osaka. She performed in the 6th Renata Tebaldi International Voice Competition, winning 2nd Prize. In July 2015 she was a young artist at the  Riccardo Muti Italian Opera Academy as Alice Ford in Falstaff, and the following October she debuted on Opening Night of the 2015-2016  Teatro Carlo Felice season in Simon Boccanegra, singing the role of Amelia Grimaldi, conducted by M° Stefano Ranzani.

In December 2015 Ms. Torre was Mimì in La Bohème, directed by Cristina Mazzavillani Muti and conducted by M° Nicola Paszkowski, a production  staged at the Ravenna Festival, then at other italian and european theatres; in November 2016 she also sang Mimì at Teatro del Giglio (Lucca), where  the director was Marco Gandini. In March 2017 she was Adina in L’Elisir d’Amore at the Teatro Carlo Felice and in august she  performed  Sacerdotessa in Aida at the Salzburg Festival, under the baton of M° Riccardo Muti.

In November/December 2017 she was Mimì at the Marche Circuit directed by Leo Muscato, then at the 2018 Spoleto Festival she performed Arianna in the new Silvia Colasanti’s opera  Minotauro and Marguerite in the Honegger’s dramatic oratorio Jeanne d’Arc au bucher, with the special performace of Marion Cotillard as Jeanne d’Arc. She won the Silver Star at  the Chigiana Prize 2018 and the 3° prize at the Forth International Opera Singing Competition of Portofino.

Among her recent and future engagements includes the Opening of the 2018-2019 Teatro Petruzzelli concert season with Poulec’s Stabat Mater, her debut as Susanna in Le nozze di Figaro     by Graham Vick at the Teatro dell’Opera in Rome, Mozart’s Requiem with the Chicago Symphony Orchestra and Paisiello’s Missa Defunctorum conducted by M° Riccardo Muti. She will     debut in Glyndebourne as Adina in L’elisir d’amore.