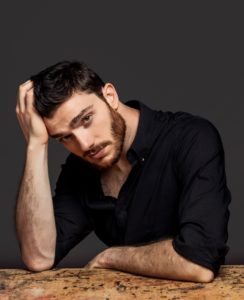 Early graduated at the Music Conservatory G.B. Martini in Bologna, Mattia Olivieri specialized then with baritone Maurizio Leoni with whom he is still studying. In 2009 he has been admitted at the Scuola dell’Opera Italiana of Teatro Comunale di Bologna and began collaborating with musical institutions such as Martina Franca Festival and Semperoper Dresden.

In Summer 2012 he participated at the Accademia Rossiniana at Pesaro’s ROF and has been admitted in September at the Centre de Perfeccionament of the Opera Valencia where among other activities he has been Schaunard  in La bohème (Chailly-Livermore).

In autumn 2015 Mattia started his relationship with La Scala debuting as Schaunard in the historical Zeffirelli’s La bohème production under Dudamel and at the same time as Belcore in Asagarov’s L’elisir d’amore  under Luisi with also a Flash Mob at the Malpensa Airport broadcasted live by RAI. It followed then Masetto in Carsen’s Don Giovanni  under Järvi, again Schaunard  under Pidò, Malatesta in the new Livermoore Don Pasquale  production under Chailly, Nardo in La finta giardiniera in the Wake-Walker Glyndebourne production under Fasolis which will also tour in Shanghai, Dandini in La cenerentola in the historical Ponnelle/Asagarov production under Dantone. In the upcoming Season he will appear as Mercutio in Romeo et Juliette, Sher’s production conducted by Lorenzo Viotti and as Prosdocimo in Il turco in Italia, Andò’s production and conducted by Maestro Fasolis and in a next one in a proyect under M°Mehta.

Among the performed roles Marcello in La bohème in Athens, Sao Paulo, La Fenice and Amsterdam and Schaunard in Valencia and at La Scala, Guglielmo in Così fan tutte in Valencia, Nice and Rome, Cherubini in the Zarzuela El duo de la Africana in Valencia, the title role in Don Giovanni  in Palermo, Trieste and in the Teatro San Carlo di Napoli tour in Dubai, Ping in Turandot  at Arena di Verona and Bregenz Festival where he also sung Donizetti’s Requiem, Nardo in La finta giardiniera in the Glyndebourne Tour, at La Scala and in their tour in Shanghai, Escamillo in Carmen in Genova, Belcore in L’elisir d’amore in Cagliari, at La Scala and in Valencia, Figaro in Il barbiere di Siviglia in Nice, Papageno in Die Zauberflöte with Circuito Lirico Marchigiano, Enrico in Lucia di Lammermoor  in Padova, Parmenione in L’occasione fa il ladro  in the ROF tour in Muscat,  Alphonse in La Favorite in three different venues over a year (Teatro del Maggio Fiorentino, Liceu and Massimo di Palermo), Malatesta in Don Pasquale at La Scala and Ford in Falstaff, his Verdi debut, at Tokio NNTT.

Among the recent and the next engagements other important debuts: at the Bayerische Staatsoper as Ping and Belcore, performed also during the Münchener Festspiele as well as Belcore, Conte in Le nozze di Figaro at Maggio Musicale Fiorentino where he will be back for other projects, Silvio in I pagliacci in Amsterdam, Nardo in La finta giardiniera at LAC Lugano and the Scala tour in Shanghai, again at La Scala with Romeo et Juliette, Il turco in Italia and Agrippina, at the Maggio Musicale for the season opening with a Cherubini rarity and Fidelio with Mehta, the title role in Don Giovanni at Macerata Festival, Ford at La Monnaie, his first USA appearance in Houston, a new Rossini project at the Glyndebourne Festival, a return at the Bayerische Staatsoper, his debut at ROH Covent Garden and at Teatro Real de Madrid with two other titles.